NBA on NBC: Crossover dribble moves, no-look passes, rim-rocking dunks this high flying title will feature 145 brilliantly detailed, motion captured stars from all 29 NBA teams, including Rookies. Build your own team with real or created players, and dive into 2-on-2 actions in your favorite NBA arena, or take the game to one of several fantasy courts. Keep the game rolling with loads of extras including hidden characters and courts, sweet spots on the court, and On Fire mode. Up to four players can participate in the fast-breaking frenzy at any one time. This game will slam and jam your mind with NBA history-making action.

NFL Blitz 2000: NFL Blitz brings you all the things you love about football and none of the things that slow it down. This is like no other football game you've ever seen before. It features bone-crunching tackles, spectacular catches, and secret plays. All in game breaking 3D action. Blitz is the NFL at its finest, featuring easy to run plays and unparalleled action all at breakneck speed. With no refs, no rules, and no mercy, Blitz is more than a game - it's an NFL highlight film  3'Lx5'.5"Wx7'H - 7 amps req.

Ready to Reserve This Game?

Click the link below to book the best interactive games for your event. 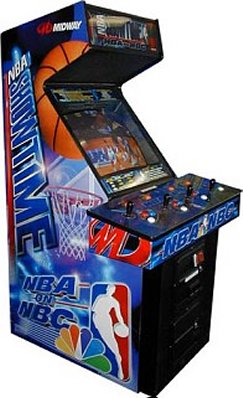 ← Go Back to All Games

A Few of Our Corporate Clients